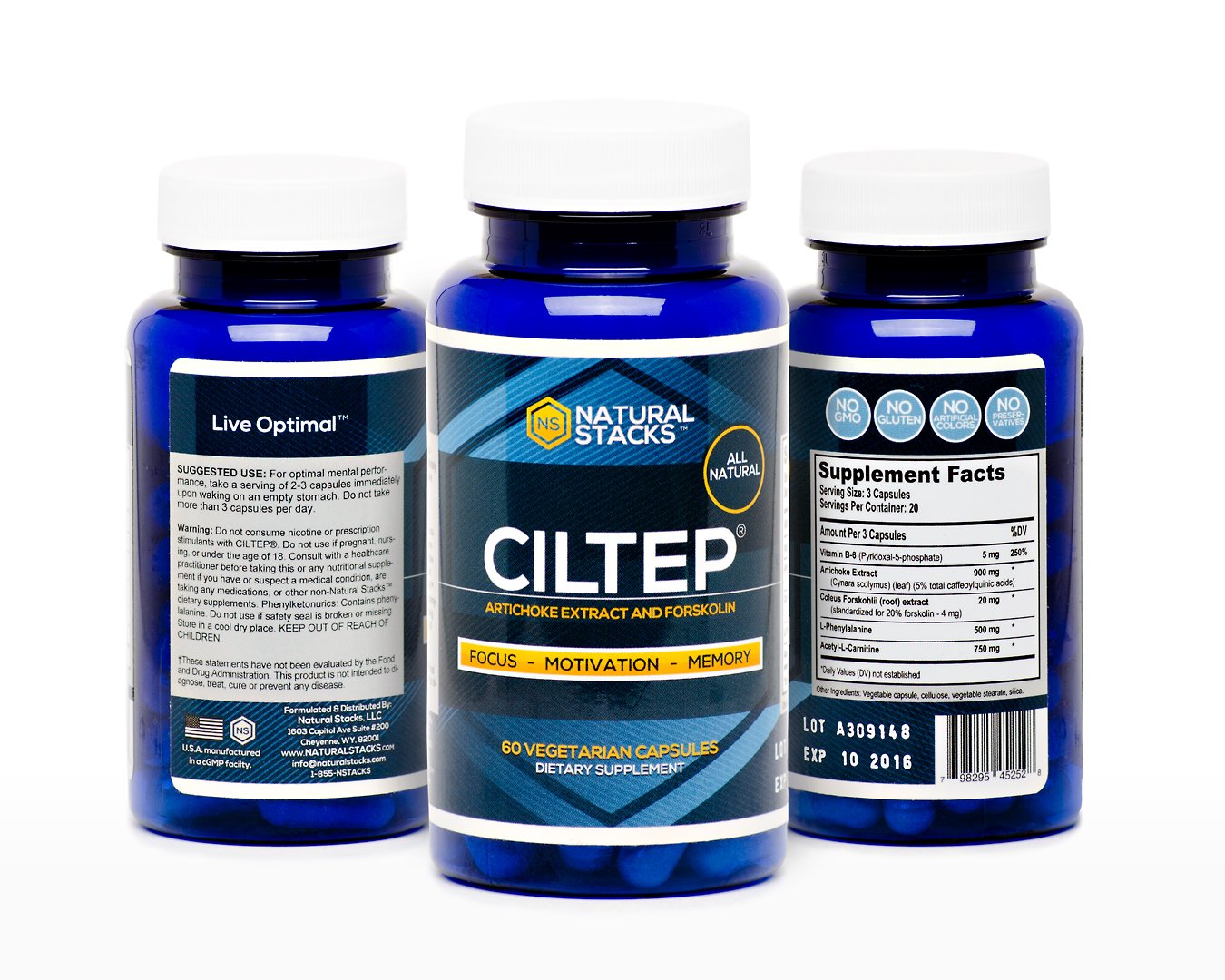 The CILTEP formula consists of all natural nootropic ingredients that work together to help you achieve optimum levels of cognition.

The ingredients found in this nootropic are as follows:

Because CILTEP does not interfere with the metabolism of dopamine in the brain, it does not have the harmful side effects as most dopamine-boosting nootropics do.

The recommended dosage for this is 2 to 3 capsules taken in the morning when your stomach is empty. If you’re new to CILTEP, start with 2 to see its effects. It can be quite tricky to gauge the efficacy of a nootropic since it could just be placebo so make sure to give yourself at least one week taking the low dosage to see if it really works on you. If not, increase the dosage to one more pill and observe its effects again.

CILTEP has a half life of 12 to 14 hours which means that half of the drug remains in your system after that period. So try to take the nootropic the moment you wake up so that by the time it wears off, you are also winding down for the day.

Each bottle of CILTEP contains 60 capsules which can last you for about a month. As with any nootropic, it’s important to cycle your use. You don’t want to build a tolerance for it. Take a 2 to 3 day break after using it for 4 to 5 days straight before getting back to it again.

Benefits of CILTEP Include:

It’s important to note that everyone is different so the effects you feel from taking the nootropic may vary from others.

If you follow the recommended dosage, CILTEP is definitely safe to use. However, if you take too much, you may experience side effects such as difficulty sleeping, mental fatigue, and drowsiness.

Again, these effects are all dependent on how you used the nootropic. If you took too much and plowed through the day doing one challenging task after the other, then you are sure to feel tired the next day. CILTEP definitely has the potential to make you feel superhuman but don’t abuse it. Take it only when needed and once you’re done for the day, that’s it! This is especially important if you are taking the nootropic daily.

Do not smoke while on CILTEP as cigarettes contain nicotine which can counteract with its ingredients. CILTEP is not an FDA-approved supplement because dietary supplements in the US don’t require it. However, the nootropics are manufactured by an FDA-approved warehouse.

Does CILTEP Work? My CILTEP Review

I will be honest in saying that I did not expect much from this nootropic but the results surely surprised me.

On my first day, I made the mistake of overdosing. I took two in the morning, and another one during lunch. I felt a significant improvement in my motivation and focus –too focused that I almost forgot to eat lunch. I took that opportunity to take a third pill on an empty stomach and while I did have a productive day, I had a nightmare of an evening. I had a hard time sleeping because the effects of the drug can actually lasts from 8 to 12 hours.

Anyway, I learned my lesson and skipped taking it the next day  –deciding to try it again another day. This time, I stuck to the lowest dose of two pills a day.

This is so important because most people (like me!) ehem, think they can compensate and make their performance, much, much, much better by taking another dose. Trust me, after you’ve taken your first dose early in the morning, you won’t need any more later. You will regret it when you have to stay up all night because you have a hard time sleeping. Besides, no one wants to be working all day.

Personally, I like CILTEP because it helps me face difficult tasks head on. Because I’m taking it first thing in the morning, I need to make sure I’m making the most of that time that the nootropic is doing its magic.

I would definitely recommend it to those who have a hard time maintaining focus and motivation. CILTEP made me feel more in control of the things I wanted to focus on. Some stimulants can make you too overly attentive on the wrong things but with CILTEP, my motivation was high and I knew exactly which tasks need to be done first.

Where to Buy CILTEP

CILTEP can be purchased online at Natural Stacks. The price is pretty reasonable for its benefits and if like me and you like stacking your nootropics, you might just get a discount on certain package bundles. I still had supply for their other products which I could stack with my CILTEP so I had to buy it by itself and pay it at full price.

Don’t bother buying CILTEP from other suppliers and get it directly from Natural Stacks. They offer the best price for their supplements and you can be assured that you are receiving the genuine product.

Previous post: What is Noopept: Everything You Need to Know About this Nootropic for Better Brain Function and Focus